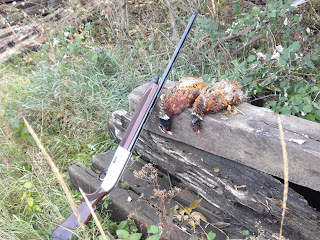 Sunday October 18th 2009
An early rise to head down to Springfield MN. We got a little bit of a late start as I was still dragging from all of the driving the day before. This farm has a number of different areas to hunt and I decided to start us out on a large area of CRP. We worked a couple of the spots that I had luck with the previous year but no luck so we worked the fence line by some cut corn and the dogs started to get birdy, they locked on an area of extra thick cover so I started kicking to get the bird up if in fact there was one. There was one, unfortunately it took off over the heads of some cattle that were feeding in the cut corn. I had to wait quite a while before he cleared the cows and I ended up passing on the shot. As we pushed the field I could see birds getting up quite a ways out and heading into uncut corn on the West end of the field. We continued to work the area and got a number of good points but all were on hens. After about 2 hours I put Marge and Tina ( the two english setters ) into their kennels and let Fergie ( Blind 11 1/2 yrs old Pointer ) have a chance. A second area of this farm is a stretch of cover that that runs about 1/4 of a mile and borders the dirt road. The cover is pretty good but not so thick as to cause problems for her walking. On the trip out she got a little bit birdy but nothing as we turned back she was working a bit more seriously. She did a soft point and I put up a hen off of her. A little ways later she started to get serious again and I thought it might have just been the hen scent from earlier. I was half asleep when a rooster got up from just to the side of me and I took a couple of poor shots and totally blew a good chance to get her a bird. How many chances does an old blind dog get?? I was plenty pissed at myself. We made to the end of the strip and worked our way back but no more birds.

After a Mountain Dew and some mini Snickers to get me a little extra energy Tina and I took off to try a new area of the farm. We went to the back side that had a creek and drainage running through it. Tina went through a fence line towards the marshy area and went on point about 10 yards into the thick stuff. I had to put my gun across the fence, crawl through the fence, get myself unstuck from the fence, get my gun, and walk over to her. As I was walking over I thought to myself “either the bird is gone or it is a young one too dumb to run for it.? It was a young one and it made it into my game bag. We worked the swampy area for quite a bit longer and found a few more hens but no roosters. As we made it back to the crp area we reworked the fence line by the corn but to no avail. I was ready to call it a weekend so we started the walk back to the truck. Tina wasn’t ready to give up and kept working the cover. When we got about 50 yards from the turn to the path to the truck she locked up hard. I moved in and a pair of roosters got up and I was able to bring it down with one shot.

All in all a good hunt. I just still feel bad that I couldn’t connect for Fergie....