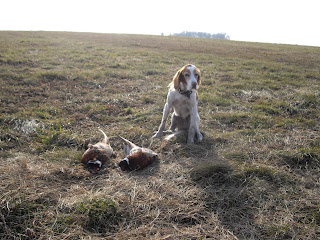 I’d been out of the hunting loop for three weeks after getting the flu ( next year I’ll get a flu shot ). The day looked like it had a good chance of going well as two roosters were going after each other in the middle of the gravel road as I was pulling up to the area I was hunting. I was starting at a farm just west of Hutchinson, MN. One of the roosters that I saw as I was pulling up to the farm flushed into the CRP that I was planning to hunt. I unloaded the two English Setters and started to follow the edge of the corn field. We worked all the way down the one side of the 40 acre field we didn’t move any birds but they did get birdy a few times. After working the short side we started to come back the long side. This side of the field borders a road and also has a nice set of trees between the road and the field. I could see birds coming out of the trees where they had been roosting. Even though I could see the birds head into the grass we were unable to get any points. I took Fergie out by herself to see if we could find any stragglers. She did a good job working but we didn’t see any birds. We decided to load up and hit another farm.

We went to south of Hutchinson and tried my favorite farm. We haven’t had as much luck this year as it has ben wet and the corn came out really late. We pushed the usual areas and didn’t see anything but as we made the turn to parallel the highway the dogs started to get birdy. Tina went on point a few yards into the grass and as I started to move in to flush the bird it flushed almost straight up and I was able to drop it in one shot. One cool part was that there a number of cars going by and they saw me get the bird and a couple of them honked. I hope it was in appreciation. We continued to work the grass and Tina went on point again and we were able to bring it down.

It was nice to finally get a few birds out of our favorite area. It was still really wet in a lot of areas so it will be interesting to see if we see more birds as it freezes up.