Unlimited Snows: Late Season Snow Goose Hunts are an Experience of a Lifetime

Years ago, I had the opportunity to bird hunt in Mexico when I was the Senior Editor at Petersen’s Hunting Magazine. I thought I had died and gone to bird hunting heaven. Ducks, geese, quail and dove in virtually unbelievable numbers.

It not only made for some great stories in the magazine, but was an experience that I thought would be impossible to rival. Guess what? I was wrong! Because now, I’ve discovered the Light Goose Conservation Order (LGCO) right here in the U.S. For those not familiar with the LGCO, it is a fancy name for having the opportunity to hunt for late-season light geese that are migrating back up from Texas and Mexico to their nesting grounds in Canada.

And best of all… no plugs are required in your shotgun. You can use large decoy spreads with electronic calls, and there are no daily bag or possession limits on the number of snows that you can harvest.
Not only is it a lot cheaper and safer than traveling to Mexico, chances are excellent that regardless of where you live and hunt, there are huge migrating flights of snow geese within a several hour drive of you. A quick check on www.HuntNFishRegs.com will give you access to all hunting and fishing regulations for every state in the U.S. Simply go to the waterfowl regs for your state and see if you too have a late season snow goose hunt. You are likely to be surprised at how many states have very liberal season dates and are encouraging hunters to get out in the field and put a bunch of snow geese down for a dirt nap! 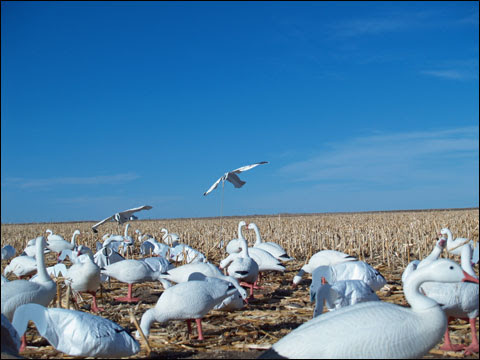 The decoy spreads worked exceptionally well, bringing in the show geese very low.
So why are so many states declaring a late season war on snows, blues and Ross’s geese? Simple and best answer is, there are simply way too many millions of them and they are destroying nesting and wetlands areas in Canada.

Go back historically, and a lot of the states actually banned snow goose hunting back in 1916 because of low population numbers. This ban by many states stayed in place until 1975 when it was deemed that the population numbers were again stable and that hunting could start up again. Unfortunately for the wildlife experts, the white geese population took off and exploded. Today it is estimated that there are upwards of 25 million of these white geese, and they are literally destroying their nesting areas, and eating themselves out of house and home.

Realizing that the problem was growing like an upside-down  pyramid, the LGCO was initiated in 1999, with the idea of making a late-season, unlimited harvest on these light geese in an attempt to reduce their numbers by at least 50 percent. For the hunter, with seasons that often run from September until the end of May, it’s been a bonanza/shoot fest for those who make the effort to chase and outsmart these wily birds.

On the downside, even with the late-season/unlimited hunts, many wildlife experts are saying that all the hunting efforts have and are doing very little to put a dent in the overall light goose populations. And while other methods… including the destruction of nests is being considered for population control, experts say that option is extremely expensive and controversial.


Read The Rest Of The ShotgunLife Article