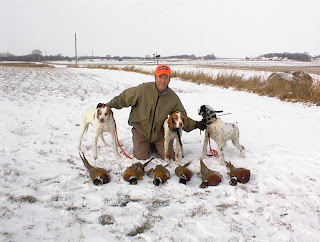 Before hand I wasn’t sure how this day’s hunt would go.
Some parts were looking good. It was supposed to be up to 40 degrees for a high. There was some fresh snow on the ground and I was taking a buddy with who would be running his GSP. On the negative side I had hunted this farm the previous weekend and had only seen 2 roosters and gotten just one. In looking at the harvest reports it wasn’t looking as if anyone else was seeing many more birds. There was also a storm due to hit that night or the next morning.

We started by walking the east side of the unit that bordered a plowed under field. No luck there. We turned right and worked along the swampy wet area that will usually hold a few birds. Again nothing. I was getting concerned that it was going to be another thin day. We moved over to the south side of the cover and walked the edge of the field. This edge borders a field that was the last one in the area to have the corn taken off of it. The were lots of tracks along the edge, but we had seen tracks all over already and hadn’t seen any birds. As we got closer to the end of the field the dogs started to get really birdy and were stopping and going. A couple of hens broke and finally a rooster got up and I was able to hit it and bring it down. While Stone, the GSP, was retrieving the bird a few more broke long and we watched where they flew to.

We split up a little bit and I sent my buddy, Tony, towards another thicker area that usually holds a bird or two. It was also an area that a few of the flushed birds flew towards. If nothing else we figured he would get some hen points. I followed Tina towards some thinner cover as she seemed to be working some scent. We worked for a fair amount of time with her pointing soft a few times and finely she locked up hard. I walked in and kicked up another rooster. It looked like I hit him on the first shot but he was still flying so I tossed out two more at him. He climbed and flew towards the farm house, over the house, over a barn, and over a tall set of trees. To me it looked like he then took a hard turn left and landed. Tony said that from his vantage it looked like he just fell from the sky. We started to work around the edge of the farmyard to see if we could find him. Going around was going to be a long walk. As we worked through the thick cover the dogs were able to point another hen and we saw another rooster flush wild so we marked him down. We made it around the farmyard and stared to look around and there in the snow was the rooster just lying there.

We headed along the edge of the cattails hoping to put another one up. We did see one break from the cattails and fly across the thick cover and looked like he landed by the edge of the dirt road. I took Tina and Marge towards the far corner and Tony went to a near corner with the goal to trap the rooster between us. I hadn’t even made it half way back when I heard Stone’s beeper collar start to chirp. I saw Tony walk in, the bird flush, the bird fall, and then I heard the sound of the shot. It was kind of cool.

We moved back to the edge of the cattails and worked the rest of the side. No points no flushes. We cut across the frozen pond and started to follow the dogs to the other side to try to find the wild flush from before. Marge and Tina went on point almost right away. I started to kick around and a hen came up. Just as I let my guard down rooster also flushed. I thought I hit him hard as he went down pretty hard. I walked over to pick him up as Tina was pointing him in the snow. As I picked him up I could tell he wasn’t hit too hard and was surprised that he hadn’t run. Tony slid him into my game vest and we continued down the cattail edge following the dogs. I wasn’t too hopeful as I had never gotten a bird in this area before and had just gotten one. 100 yards later the two Setters went on point again and another rooster got up and another easy shot put him in the bag. 50 more yards and the scene was repeated again. 2 hours and we had our six bird limit. I felt bad because I kept sending Tony towards the areas that I have had good luck before but I was the one getting the shots. We’ve hunted together long enough that the other guy doesn’t get too worked up when it happens this way because we know that the next time it could work out the opposite way.

We walked back to the trucks and were going to arrange the birds and dogs and try to get a good photo or two. I started to pull the birds out of my game bag, put them on the ground and one of them took off running. Fortunately the dogs were still close by and they caught him in a flash....

It ended up being one of those days where things just work out well. The dogs listened and the birds cooperated. I think that the birds were on the move and were eating heavily in anticipation of the incoming storm that was predicted.

Sunday it was snowing too hard to make it worth risking the drive. It is looking like we are having a real winter in MN this year.

Hunt over 5000 acres of private property in MN
http://hunt.mn/