Flush with grouse but not hunters 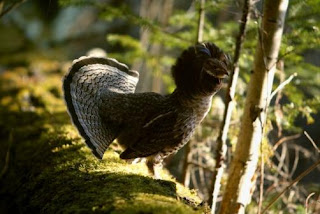 For Minnesota's ruffed grouse hunters, it might not get much better than this. ¶ The "Ol' Ruff" population is up a remarkable 43 percent from last year, based on spring drumming counts, and the population index is the highest it's been in 37 years. ¶ This is the fourth consecutive increase, and the grouse population probably is at or near the peak of its 10-year boom-to-bust cycle. That means the hunting season, which opens Saturday, could be one of the best in decades.

"I think we'll see a noticeable increase in birds out there, said Dan Dessecker of Rice Lake, Wis., an avid grouse hunter and director of conservation policy for the Ruffed Grouse Society.

Said Dave Schad, Department of Natural Resources fish and wildlife section chief: "Hopefully, we're approaching one of those really special years with peak bird abundance. I think there's a lot of excitement and a lot of interest.''

But two key questions remain: Will hunters actually find significantly more grouse this fall? And how many hunters will show up in the woods to seek them?

The last time the grouse index was nearly this high, in 1998, an estimated 142,000 hunters bagged almost 1 million grouse.

Yet no one expects that kind of harvest this fall. A major reason: Despite the expected huge increase in bird numbers, it's highly unlikely that 142,000 hunters will show up. Though grouse hunter numbers historically have climbed and dropped along with the grouse population, the long-term trend has been a decline in small-game hunters.

Last year, grouse numbers also were up from 2007, but hunter numbers dropped slightly.

Read full article in the StarTribune