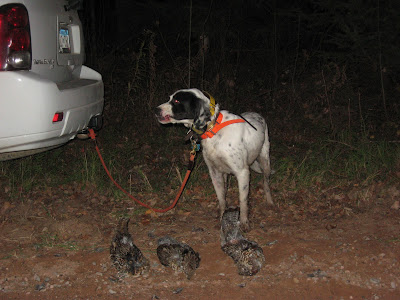 Finishing Up After Dark


I was able to make it up to Nemadji State Forest after work in time to get a couple of hours of grouse hunting in.  I hadn’t hunted these trails in over 5 years but had good luck in years past and was anxious to give it a try.

My initial impression was not favorable as my little backwoods trails are now ATV trails.  Makes for easy walking but with how close this area is to two metro areas I know how much pressure these trails get and the grouse get pushed further back into the cover.  Tina and I walked for about 30 minutes on the ATV trail before we could get to a non-motorized trail.  10 minutes down the trail she went on point.  I missed the first bird but fortunately I connected on a second bird.  This trail died out a short distance later so we turned around and headed back to the main trail.  The trail went through some good looking cover but we weren’t seeing any birds.  We approached an area that bordered some lower wet sections and Tina was going on and off point so I moved in front of her to try to block off the bird.  She continued to work the area but we didn’t find anything.  As I walked back up to the trail a bird got up, two shots, another bird, two more shots, reload another and another bird..... eventually 7 or 8 birds got up and I took 6 or 7 shots and totally missed on them and two of the shots were nice straight away trap style shots.. I was ticked... Tina was wondering what happened as there were no birds on the ground for her to find.  We continued down the trail to where it came out on the main forest road in.

After a short break we started back towards our parking area.  When we got to the spot where I had missed all of the birds we bushwhacked around the area and Tina pointed one on the side of a small hill and this time I was able to complete the task at hand.  After continuing back on the trail without anymore action I knew we were getting to within 5 to 10 minutes of where we had parked and Tina started to get birdy.  I worked my way into the woods to help her out and she get relocating off to my left so I stopped to watch her and I could hear a bird moving to my right.  I could tell that Tina could hear it also as she was looking in the direction of the sound.  I took one step and the bird got up and came back down with one shot.  In about 3 hours of afterwork walking on highly traveled public land we were able to put three birds in the bag.