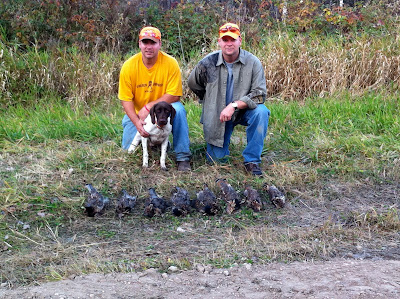 Tony, Mark, and Quetico with our bounty.

Saturday was going to be another warm one and this time there would be three of us along with three dogs.  We met for breakfast and hit the woods around 8. The three of us started down the trail and moved a bird or two.  We came to a fork in the trail and I told the tow of them that I’d go into the cut and then work back towards them and try to push a few birds from the thick cover to the trail.  As Tina and I moved back towards the trail she went on point and I was able to harvest the bird and in the process won our $1 pool on the first bird harvested.  After hunting the area for a bit more we started to head back to the truck on the same trail that we headed in on.  Even though we had just worked the trail about an hour earlier we were able to move a few birds and took another one.  As we got about 50 yards from the trucks the dogs started to get birdy and we followed them into the thick cover.  At about 10 yards from the truck and just off the trail we got a nice flush and I was in a position to collect the bird.  The thermometers on the trucks were reading 70 degrees so we decided to take a lunch break.
After lunch we decided to try a different trail.  I left Tina in the truck to rest and recover a bit.  The trail had a lot of nice cover along the sides and we had a few wild flushes.  We were hunting with two GSP’s.  Stone who is 12 mostly stayed on the trail but would venture out into the cover when the scent got strong.  Quetico, who is about 9 months old and just complete is Natural Ability Test with a perfect score, was full of energy and leading the way.  About 2/3 of the way down the trail Tony was able to connect on a bird.   At the end of the trail is a clearing with about 5 island of clutter and trees from when they cleared out the area.  As we worked our way around the area Mark connected on a couple of fast flushers.  I told him earlier in the hunt that he wasn’t doing his share to stimulate the economy by being stingy with his shell usage.  He took the advice to heart and was now shooting and connecting.  After returning to the truck we decided to go back to our original spot and rework it for the evening shoot.  About 15 min into the hunt Tina went on a solid point, I walked in, the bird flushed, and I connect with one shot.  Mark commented “ that is the way it is supposed to work.”  It is nice when it does all come together.  I do like putting birds in the bag as much as the next guy but the real joy comes in watching it all come together for the dogs.  On the way out Tony and Mark were each able to bring in another bird.
It was well into the 70’s during the day and we moved over 30 birds.  Not bad for three people and up to three dogs moving through the woods on public land.