During the overlap of the ruffed grouse and woodcock seasons, upland hunters get a unique opportunity to hunt both game birds at the same time. Here are some hunting tips for grouse and woodcock and how you can prepare yourself for a mixed-bag hunt.

RECOGNIZING COVERS THAT HOLD BOTH GROUSE AND WOODCOCK
Grouse and woodcock prefer young woods in regrowth — what is known as successional habitat — to woods that are middle age or approaching senior citizenship. Successional habitats are thick with aspens, birches, maples, hemlock, spruce and brushy scrub.

During the early season it’s the feeding areas that hunters need to key on. Opening a grouse crop reveals they aren’t picky, but during the fall they are likely feasting mainly on berries and fruit such as high bush cranberry, feral apples, and wild grapes.

Woodcock, on the other hand, feed almost exclusively on earthworms in the soft soil of young clearcuts, abandoned farmland and areas near or in wetlands.

The overlap of areas that appeal to both grouse and woodcock — or what I call combo cover — is so prevalent that the chances of encountering both species in one hunt is a forgone conclusion.
With that said, grouse and woodcock are “where you find them.” I have flushed grouse from the middle of open fields and woodcock on dry hillsides under towering white pines. You need to be ready for anything.

READ YOUR BIRD DOG FOR A SUCCESSFUL HUNT
It’s well known that a bird hunter can put a fair amount of ballast in his game pouch hunting ruffed grouse without a dog. But that hunter wont be spicing up many grouse dinners with woodcock appetizers. Like many grouse hunters I started out without a dog. I learned where they spent early mornings and mid days and where they went to roost in late afternoon –and, most important, the escape routes they used in a particular cover. On those dog-less grouse hunts I would occasionally kick up a woodcock by nearly stepping on them. One woodcock means there are likely more in the general area and you can wander around aimlessly, or even do a grid pattern and move birds. 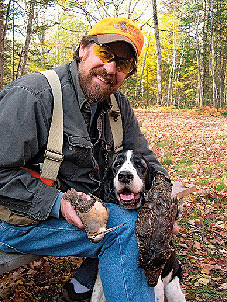 Author Brad Eden with his springer spaniel Jake and a mixed bag of grouse and woodcock. Photo by Brad Eden.
But for mixed-bag grouse and woodcock hunting at its best, a close-working flushing dog or a staunch pointing dog is the ticket in the thicket.

I can tell when my flushing spaniel is tracking woodcock scent. Woodcock bop and weave around the forest floor like a wind up toy while feeding or moving about a cover. A flushing dog will twist and turn itself into a pretzel when on that ground scent. When I see this I get ready because a flush is imminent.

Not all dogs will share exactly the same body language, but you can become good at reading your dog. My current springer spaniel has a unique behavior that gives me an extra second or two to prepare for the flush. When approaching the feathered source of that scent trail he will suddenly stop and look up into the air to watch the bird flush — as it inevitably does. Although under most hunting situations a hard flush is expected of a spaniel, I have come to rather appreciate this unique “heads up” for woodcock.

Pointing dogs and woodcock go together like birds and flying. The woodcock often sits patiently under the pointing dog’s nose, allowing ample opportunity for the gunner to approach, look around for shooting lanes, and close in for the flush. That’s the perfect scenario and happens enough to be typical.

But woodcock aren’t slouches and will sometimes walk out from a point and flush wild like a grouse. Be prepared to be surprised.

Read The Rest Of The Game & Fish Article