God Made a Dog - Video 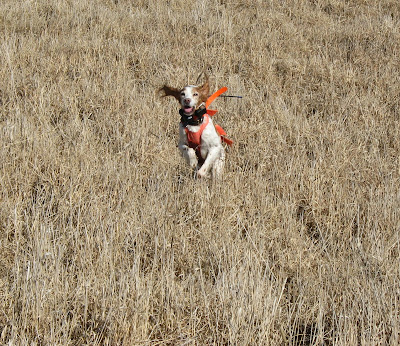 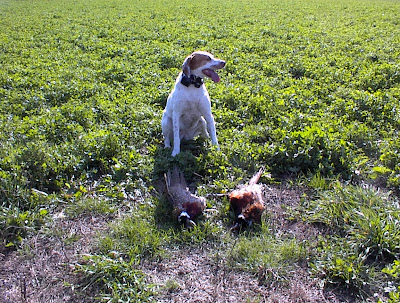 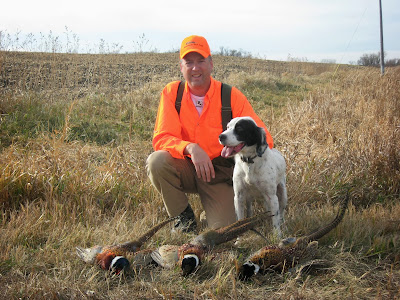 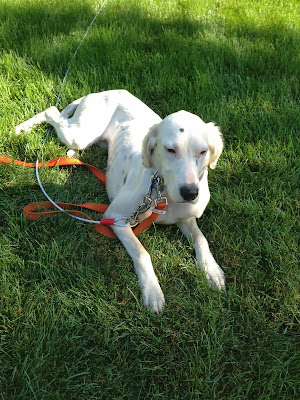 MN 2013 Walk In Access WIA Information and Maps are available

A long winter followed by a cold, wet spring contributed to a significant decrease in Minnesota’s pheasant count, which declined 29 percent from 2012, according to the Minnesota Department of Natural Resources (DNR).
“Minnesota’s results reflect what we’re seeing in other states,” said Rachel Curtis, DNR wildlife research biologist. “South Dakota had a 64 percent decrease in its brood survey. North Dakota’s most-recent rooster crowing count is down 11 percent from last year. And Iowa reported a 19 percent decrease in its August roadside count.”
Minnesota’s 2013 pheasant index is 64 percent below the ten-year average and 72 percent below the long-term average.
Pheasant hunters still are expected to harvest about 246,000 roosters this fall. That’s down 44,000 from last year’s estimate and is less than half the number of pheasants taken during the 2005-2008 seasons when hunting was exceptionally good.
The highest pheasant counts were in the southwest region, where observers reported 51 birds per 100 miles of survey driven. Hunters should find good harvest opportunities in west-central, east-central and south-central Minnesota.
“Pheasant populations respond to habitat abundance and changes in weather,” Curtis said. “The steady downward trend in Minnesota’s pheasant population during the past several years is primarily due to habitat loss. Weather has caused minor fluctuations.”
The most important habitat for pheasants is grassland that remains undisturbed during the nesting season. Protected grasslands account for about 6 percent of the state’s pheasant range. Farmland retirement programs such as Conservation Reserve Program (CRP), Conservation Reserve Enhancement Program, Reinvest in Minnesota and Wetlands Reserve Program make up the largest portion of protected grasslands in the state.
High land rental rates and competing uses for farmland diminish the economic attractiveness of farmland conservation programs. CRP enrollment declined by 63,700 acres in Minnesota’s pheasant range over the last year and contracts for nearly 400,000 acres of statewide CRP lands are scheduled to expire during the next 3 years. If not re-enrolled, this would reduce CRP acres in Minnesota by 30 percent.
To help offset continued habitat losses caused by reductions in conservation set-aside acreage, the DNR has accelerated acquisition of wildlife management areas in the farmland region of Minnesota. The U.S Fish and Wildlife Service also acquires and protects habitat across the state. In addition, the DNR supports habitat conservation on private lands by working with a variety of partners in the Farm Bill Assistance Partnership and Working Lands Initiative.
High spring precipitation and below average temperatures hurt nesting this year. This year’s average hatch date was delayed to June 20, which is 11 days later than the 10-year average of June 9.
Although fewer broods were seen, brood size was larger than last year and comparable to the long-term average. Actual reproduction rates may be higher than the survey suggests. Hens that were successful nesting later in the season tend to be underrepresented in roadside data and it is possible that hens were still nesting or in heavier cover with young chicks during the survey period.
The pheasant population estimate is part of the DNR’s annual August roadside wildlife survey, which began in 1955. DNR conservation officers and wildlife managers in the farmland region of Minnesota conduct the survey during the first half of August. This year’s survey consisted of 171 routes, each 25 miles long, with 152 routes located in the ring-necked pheasant range.
Observers drive each route in early morning and record the number and species of wildlife they see. The data provide an index of relative abundance and are used to monitor annual changes and long-term population trends of pheasants, gray (Hungarian) partridge, cottontail rabbits, white-tailed jackrabbits, mourning doves and other wildlife.
The gray partridge index also decreased from last year and remained below the 10-year average. The cottontail rabbit index increased from last year but stayed below the 10-year and long-term average. The jackrabbit index was 87 percent below the long-term average. Finally, the mourning dove index was 20 percent below last year and lower than the 10-year and long-term averages.
Original MN DNR article
No comments:

Innotek Track and Train CS 1600 Controller and 2 Collars.
Transmitter / Controller is fully functional with a NEW antenna.
1 collar works in both train and track mode.
2nd collar only works in train mode.
You can actually hear a very slight sound so the signal is reaching the beeper but it isn't useable for tracking.

Collars are matched with the controller and I am including the installed batteries so that you don’t have to match them up. 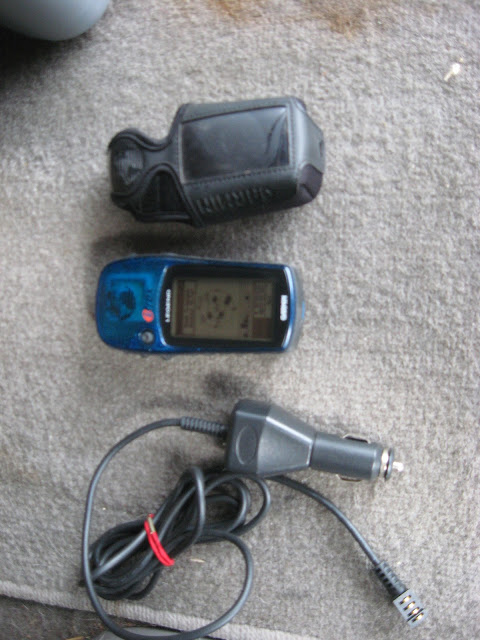 One of the most versatile navigators around, the Legend H features a high-sensitivity GPS receiver that holds a signal in the toughest environments.The brightly-colored eTrex Legend H combines all of the intuitive, user-friendly features of the eTrex series with a detailed basemap and 24 megabytes (MB) of internal memory for storing optional maps.
This handy device provides you with mapping routes, sun and moon information and a hunting and fishing calendar.
Enjoy Clear Reception With its high-sensitivity, WAAS-enabled GPS receiver, eTrex Legend H locates your position quickly and precisely and maintains its GPS location even in heavy cover and deep canyons. The advantage is clear — whether you’re in deep woods or just near tall buildings and trees, you can count on Legend H to help you find your way when you need it the most.
Add More Detail The Legend's basemap contains lakes, rivers, cities, interstates, national and state highways, railroads and coastlines. Legend also comes preloaded with marine navigation aids. And, with Legend's 24 MB of memory and USB port, you can download even more map detail with data from Garmin's entire line of MapSource® mapping products.
Item #3 - Columbia Mens Full Draw Quarter Zip Shirt Long Sleeve M/L NWT 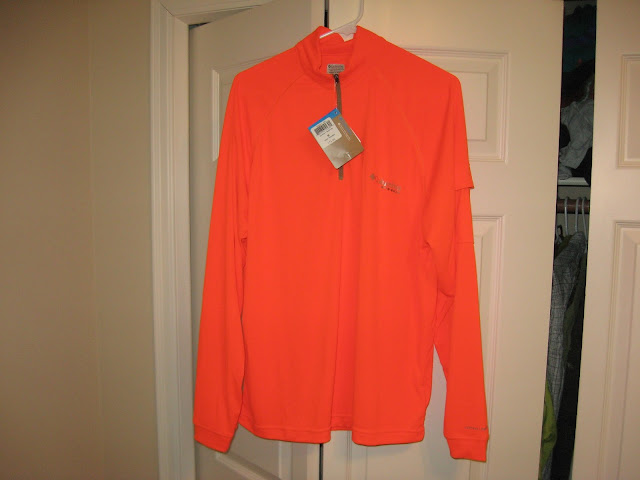 The label and tag say Medium but this fits me almost perfectly and I usually wear a L in Columbia.  I am 6'1" and 185 lbs.
The Columbia Full Draw Quarter Zip Shirt is ideal for wear in nearly any type of weather. Featuring Omni-Shield water repellent technology and Omni-Shade sun protection technology, this shirt will keep you comfortable rain or shine. Wear alone on early season upland hunts, or as a layer when the temperature falls later in the season.
Item #4 - Columbia Mens Perfect Shot SS Polo Large Blaze NWT 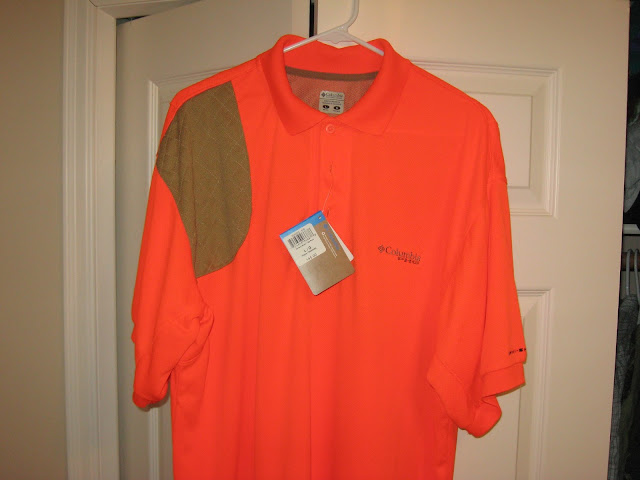 FEATURES:
Dry. Wetness is Out.
OMNI-WICK®
Keeps You Dry
and Comfortable
Protected.  Cushioned, blocked, shielded and shaded. OMNI-SHADE®
All items for sale @ UplandBirdHunter.com

Email ThisBlogThis!Share to TwitterShare to FacebookShare to Pinterest
Labels: For Sale 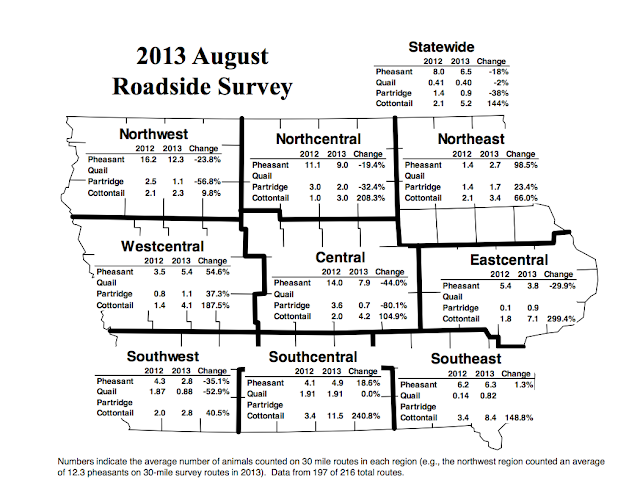 With September 15th just around the corner, we’ve been taking a look at some of the forecast data provided by both Michigan Department of Natural Resources (MDNR) Wildlife Division, as well as the summary provided annually by the Ruffed Grouse Society (RGS).

And now, the forecast. According to MDNR Upland Game Bird Specialist and Program Leader Al Stewart, grouse drumming surveys were conducted during the months of April and May of this year.  Data collected from the same 2012 sampling areas found a 10 percent decline in the number of drums heard on a year-to-year basis. As was the case in prior years, the highest number of drumming counts was found in the upper peninsula, followed by the northern lower, then southern lower. With the exception of some areas of the upper peninsula, the statistical differences between 2012 and 2013 did not appear to be significant.

According to Stewart, 2013 grouse populations will likely have a slight decline from 2012 levels, following their cyclical peak which was believed to have been reached in 2011.  Despite the late arrival of spring this year, breeding conditions for both grouse and woodcock are believed to have been favorable.  These conditions have the potential to result in a statewide harvest of 240,000 grouse and 74,000 woodcock during the 2013 seasons.

Just as a reminder, although the ruffed grouse season begins with the small game season on September 15th, opening day for woodcock hunting is set for September 21st.

Department of Natural Resources Upland Game Bird Specialist and Program Leader Al Stewart reports, ruffed grouse drumming counts were conducted statewide along 95 survey routes during April and May 2013. Using data from 87 routes run in both 2012 and 2013, statewide there was a 10.3 percent decrease in the average number of drums heard per route between 2012 (11.8) and 2013 (10.6). Highest drumming counts were in Zone 1 (Upper Peninsula; 14.5), followed by Zone 2 (northern Lower Peninsula; 9.4) and Zone 3 (southern Lower Peninsula; 6.4).

Stewart concludes, “Based on current survey data, I expect the grouse population this fall will be on a slight decline following the peak of the cycle in 2011.  The 2013 fall ruffed grouse and woodcock numbers could be similar if not a little bit lower statewide compared to 2012.  With favorable annual production, hunters could take approximately 240,000 grouse and 74,000 woodcock in 2013.

Although spring arrived two weeks later than normal; the warm, average weather conditions this year may have a positive impact on brood survival.  If we have favorable production this spring, I anticipate fall ruffed grouse and woodcock numbers could be similar to or only down slightly from last year. Due to normal rainfall and lack of early summer frosts, I expect soft mast production to be very good this fall compared to 2012.”

The ruffed grouse season begins on September 15, statewide.*  In 2013, the opening date for woodcock hunting will be September 21.*  The USFWS framework for Michigan allows for the woodcock hunting season to open no earlier than the Saturday closest to September 22 and to run for no more than 45 days.

Are you looking for new places to hunt grouse and woodcock?  Stewart invites hunters to explore the 10-million acres of public land in Michigan. You can plan your next hunting adventure online with Mi-HUNT. This DNR hunting tool allows people to search for grouse and woodcock habitat on public hunting lands. “Bird hunters have found this tool to be very helpful for viewing different forest types, topography, satellite imagery and road layers…all from the comfort of their own home”, said Stewart.  “There’s even a tutorial designed for grouse hunters.”  To learn more about this free interactive mapping application, visit www.michigan.gov/mihunt for details.

Months of persistent drought in 2012, a cold, wet spring in 2013 and a reduction in habitat have impacted pheasant brood counts, according to a report released today by the South Dakota Game, Fish and Parks Department. But officials note that South Dakota will still offer the best pheasant hunting experience in the country, with more than 1.1 million acres of public land available for pursuing birds within the state's main pheasant range.

The department's annual brood count surveys the number of pheasants per mile as a means to track pheasant numbers over time. The actual population size is estimated after the pheasant hunting season ends, with additional information gathered from hunter surveys and a winter rooster-to-hen ratio survey.
The 2013 report indicates an index of 1.52 pheasants per mile, down from 4.19 pheasants per mile last year.

"The annual brood count provides us with a year-over-year analysis tool," said Travis Runia, GFP's lead pheasant biologist. "Our numbers may be down from last year, but hunters will still be able to find birds."

GFP conducts the brood route survey each year on select stretches of roads around the state. All pheasants are counted along each route, with particular attention to the number of broods.
"Much of the northern Great Plains experienced the same weather and habitat factors that impacted our brood counts," Runia said.

Runia noted that lower brood counts in 1992 and 1997 still resulted in almost one million pheasants harvested in South Dakota each year. Since 1992, the state has added 350,000 acres of public access within the main pheasant range, expanding hunting opportunities. 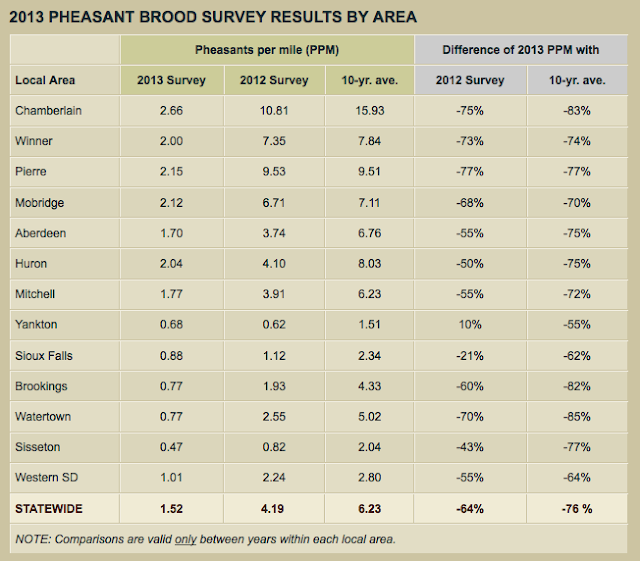